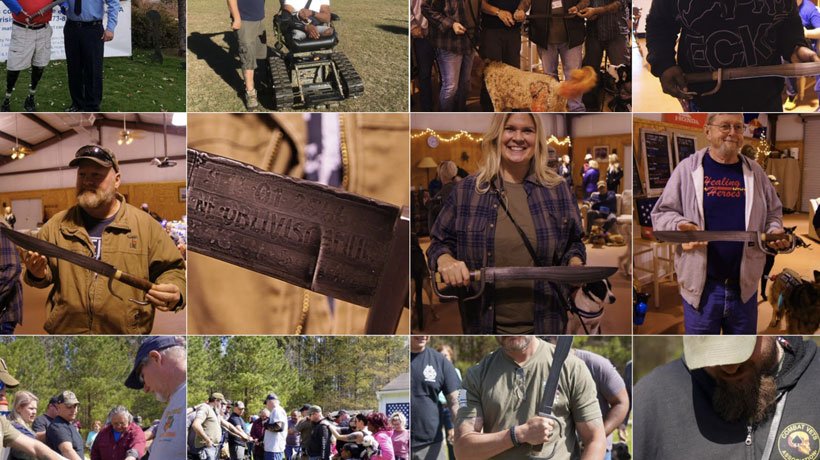 New York, NY (December 7, 2020) –  The newly created nonprofit SpartanSword.org launched this month with veterans of the United States military, New York Fire Department and both the New York and Houston Police Departments vowing to fight the growing suicide rate amongst the veterans and first-responder communities with a sword, and an Axe forged from the 9.11 tragedy.

SpartanSword.org’s mission to prevent veteran and first responder suicide comes as the American Legion reports that the rate of suicide among veterans ticking up, to 26 veterans per day taking their own lives in 2020. Active duty suicides are also at a six-year high at 25.9 per 100,000 troops. COVID-19 is potentially making it worse as 2020 has seen a 30% increase in suicides year-over-year, according to the Associated Press.

Warfighter Hemp, a manufacturer of CBD products infused from industrial hemp based in Boulder, Colorado, is proud to sponsor the SpartanSword.org. It’s founder, Lt. Col (ret) Steve Danyluk (USMC) created the company after a tour at Walter Reed Medical Center opened his eyes to opioid dependency. Opioids are fueling the suicide crisis among veterans and Danyluk knew that a better, more holistic, solution was available. Danyluk and New York Fire Department’s Danny Prince are the co-creators of the Spartan Sword and Axe.

“Several of us were sitting around one day kicking around ideas on what we might do to combat the veteran suicide rate when Danny mentioned that he has 35lbs. of scrap steel from the World Trade Center wreckage of 9/11, pieces of which they had been sending to Fire Departments around the country. Having recently become familiar with the Spartan Pledge, using this sacred steel to form a Spartan Sword as a symbolic compliment to the Spartan Pledge seemed like a no-brainer,” said Steve Danyluk., founder of SpartanSword.org. “That idea has become a nonprofit committed to supporting our veteran and first responder community at a time when they need it the most.”

A board of three veterans provide counsel and oversight of SpartanSword.org. Spartansword.org has no paid members and has written into its by-laws that it can never hold more than $50,000 for more than a 90 day period in its accounts as the primary mission of the non-profit is a modest one to provide travel for the sword, axe and their escorts.

“We gauge the metrics of success based on the number of lives that we save, not the size of our bank account,” said Danyluk. “The financial requirements for this mission are modest, and we hope to appeal to small donors, perhaps at risk veterans and first-responders themselves, who might not have the financial resources to donate to a “big-box”non-profit. By limiting our size, they will know that their modest contribution is not just a drop in the bucket and will provide meaningful support to this mission and for their community.”

The Sword travels the country with Aaron Clark, a former US Marine and current firefighter with FDNY,  who shares the Spartan Pledge with veterans to drive suicide awareness. Joining Clark will be officer Chase Cormier of the Houston Police Department. Chase is also an an Army veteran of both Iraq and Afghanistan.

“Once Covid becomes more controlled and things begin to open up, I think we are going to see a tremendous need for both the Spartan Sword and Spartan Axe to partake in gatherings of our veterans and first-responders,” said Chase Cormier, Army veteran.

The Spartan Pledge, created by Army veteran Boone Cutler, is a simple two sentence oath that a veteran pledges to a fellow veteran that they will reach out if they ever find themselves in a time of crisis.

In September, Warfighter Hemp sponsored the creation of the Spartan Axe, forged from the same Twin Tower steel that was turned into the Spartan Sword, by Spokane veteran and Purple Heart recipient Ben Hayhurst. It was dedicated during a ceremony with the Spokane Fire Department. The Spartan Axe and pledge supports first responders struggling with suicide and will be housed at the New York Fire Training Academy in Manhattan.

SpartanSword.org is seeking tax deductible donations at www.spartansword.org to fund suicide-prevention events for veterans and first responders nationwide. To date, the Spartan Sword has participated in 63 such events.

Warfighter Hemp gives 10 percent of its product proceeds to veteran charities, donating more than $135,000 since the company’s inception in 2017. To learn more about Warfighter Hemp, visit warfigherhemp.com and follow the company on Facebook.

SpartanSword.org is a 501c3 non-profit organization committed to halting the rise in suicides within the veteran and first responder communities. The SpartanSword.org funds events across the United States where veterans and first responders can view the Spartan Sword and Spartan Axe and take a simple pledge to reach out to another veteran or first responder should they ever consider suicide so they can get the support they need. Make a tax-deductible donation at www.spartansword.org to support this life-changing work.

We are a worldwide organization with representatives and ambassadors around the globe. We give 50 percent of our profits back to other charities that support veteran’s independence. These organizations include SpartanSword.org,  Independence Corps, Spartan Alliance, Villagers for Veterans and  Aleethia Foundation.